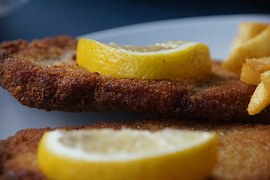 When I was a kid, my dad made up a bedtime story every night. I still remember one about this skunk who was always ditched by his friends because he smelled so bad. They liked him, but they’d hang out and eventually the stench got to be too much. So, then the skunk’s birthday came around and everyone felt guilty because, hey, he was a decent guy, they knew they should throw him a party, he always went to their parties, etc. But what about the smell?

My dad built up to the climax really well. He got in to that skunk’s mind and how insecure he was. How hopeful he was that he wouldn’t be passed by on his birthday, of all things.  My anxiety was through the roof by the time the big day came around.

And…we weren’t disappointed! The local owl (who, of course, was super wise) organized a surprise party and EVERYONE EXCEPT THE SKUNK WORE NOSE PLUGS SO IT WAS PERFECT FOR EVERYONE.  God I loved that story.

END_OF_DOCUMENT_TOKEN_TO_BE_REPLACED

Quite a few people have asked where we came up with our eight month old daughter’s name—Laken.

I wish we had some super cool story with loads of meaning and an ancestor or two thrown in, but that isn’t the case (sadly!) To be very honest, I first heard the name when I was teaching in London. One of my colleagues was named Laken, and I fell in love with it the second I heard it.  Any time she was mentioned at faculty meetings or in the hallway, I found myself rolling the name over my tongue again and again.  It just had such a good sound to it—no matter whose voice said it.

Like all parents, Todd and I took our duty to name a human being very seriously.  We wanted something that was unique and yet not impossible to pronounce or spell.  Since that seemed a tad broad as a starting point, we added the requirement that it be Irish (for no other reason than just because Todd loves Ireland so much) and we both had to be 100% in support of it.  Period. No compromises.

Todd’s initial pick for a name was Ireland. I just couldn’t give that big a tribute to the country, so we kept thinking.

END_OF_DOCUMENT_TOKEN_TO_BE_REPLACED

Today a new friend came over, and I told her about this blog.  (I’ve been keeping it relatively secret at the moment in case someone actually reads it before I’m ready to “go live.”)

She and I can relate to the topics I want to explore here on multiple levels. For one thing, she used to teach English at the school I currently teach English at.  We’re the same age, we both came over to Heidelberg a long time ago with the idea that there was no other city on the planet we’d be happy living in, and now we both have children and very little chance of being able to move back to the States any time soon.  I think we’re also similar in that this fact confuses us, emotionally.

It’s funny, this stage of life that we’re in.  Both of us worked so hard to establish ourselves as long-term expats.  But, now that we’re married and have young children there’s this whole new slew of questions, doubts and stress that accompany that.  I think it’s a given that mentalities/dreams/etc. change when you have children. And, that’s true a million times over when you live 4,000 miles away from family in a culture that, no matter how long you’ve lived there, still isn’t quite your own.

Anyway, in our three hour, animated conversation an interesting question came up—what type of expat did we want to be at this point?

END_OF_DOCUMENT_TOKEN_TO_BE_REPLACED

Fifteen years ago a carpet salesman in Fethiye, Turkey offered me the strongest, muddiest cup of coffee I’ve ever had. After I was done drinking, he read my fortune in the leftover grounds at the bottom of the mug.

“What does that look like to you?” he asked, pointing.

I peered down, trying to see something clever in the dark smudge, but he answered for me. “It’s a bird. It means you’re flying in the direction of your happiness!”

He was right on two counts. First of all, that clump of grounds really did look exactly like a little bird traveling up towards the rim of my cup. As soon as he said it, the thing transformed, came in to focus. Second, everything that happened in my life after that trip ultimately led to what can only be described as my happiness.

In front of the carpet shop.

Now, he could have been a bit more specific and told me that it was not going to be an easy journey. I wouldn’t have minded a head’s up that it was going to involve all sorts of things—like, the decision to leave the so-called ‘gravy train’ of teaching middle school on a military base in Germany to pursue a Master’s degree in creative writing in London, subsequently moving back in with my parents when I was 30 years old (single, unemployed, and broke,) sleeping on a friend’s dorm room floor in London while I job hunted the following year, a detainment on my way in to England, a deportation on my way out (both bureaucratic nightmares, neither one my fault, I swear!) There was a relationship with someone twenty-two years older, an attack while riding my bike in Germany, and two rounds of expensive, invasive fertility treatments before we were able to have a daughter.

At this point in life I can say the prophesy has been fulfilled.  I’m living in Heidelberg, the city that first drew me to Europe. My husband is the ultimate life partner. I enjoy my job. I have a baby daughter who is the light of my world, and two grown stepdaughters whom I love and who have accepted me from day one.

The thing is, in a very strange way, the past few years of happiness have made me…lazy? Definitely less motivated.  Desensitized to my surroundings, even?