I tell white lies from time to time. I’m a white liar.

Here are some of the pale little fibs that find their way out of my mouth;

I know I’m not alone in this…right?

Seriously, I have no idea.

Then Todd and I exchange mutually confused glances like, why did you/I just say that? And then, to make it worse, he’s the type of super honest, loyal to all rules, ex-military guy who says, “No we didn’t—we went there for lunch!” to which I smile and say, “Really, babe? Are you sure? I thought it was dinner?” And he says, “What are you talking about? It was noon!” and I say, “Oh? It felt so much later than that!”

The whole time I have my eyelids open as wide as they go, smile frozen, bugging my eyes out in an attempt to say please shut up and cover my lie! It’s embarrassing to look guilty and insane. But–I know–I do it to myself.

But Todd’s still in trouble. 😉

My most common white lie is provoked by having plans I want to cancel. Sometimes, even as I’m making these plans, I’m already thinking of potential white lies I can say to get out of them when the time comes.  Because that makes sense?!

My friends aren’t so demanding that they’d be mad at me for canceling. But, how do you call someone up and say, “Yeah, I know we have this whole fun outing planned, but I’d prefer to be alone.” That sounds potentially Emo, unreasonable, and like a flat out lie in itself. It could easily be negotiated and talked out of. So, guilt and a fear of pressure goad me on.

The easiest thing to do would be to say that I’m sick. But I don’t play easy. My white lies are overly complex. I’m much more likely to say something like, “Yeah, so I was just getting ready to come over and something weird happened to our washing machine! I better stick around here and clear out the bubbles.”

And then, with my bad luck, the person will try to help out

because their next-door neighbor just happens to fix washing machines (of course.)

So I have to lie harder and say something like, “Oh, no, actually that won’t work because I’m supposed to be sticking around for this gas meter person and I’m assuming they don’t like it when other workers are in their way. Yeah, actually, now that I think about it, that’s another reason I can’t come over. I forgot all about this meter guy…”

There’s no way anyone is buying this. But, I can’t relax about canceling unless I deliver what feels like a non-negotiable, totally uncontroversial excuse.  Even if I’m a terrible liar and no one believes it, anyway.

Another of my most commonly used white lies relates to how long I’ve lived in Germany. And, I do have an actual reason for this one.

I’ve been here for fifteen years (give or take a few because I lived in London for two years and back with my parents after I had visa trouble.)

Fifteen years is quite the chunk of time. Fifteen years comes with expectations. I should undoubtedly be speaking flawless German and know all the idioms and be able to talk my way through topics as dense as anthropology, mysticism, and the pathology of developing conversational habits in four year olds.

Now, my German is not bad. If Todd were reading this over my shoulder, he’d probably swipe my fingers away from the keyboard and say, “Yeah, that’s a white lie right there. Your German is fluent.”

But, it’s not fifteen years fluent.

I’m trying to see if I can rank it on a scale of some kind. That’s tough to do, though, because a lot of factors come in to trying to weigh down on something like this.

For instance, if we were basing how fluent I am given a situation where I’ve been speaking German all day, every day, for fifteen years straight—meaning at my job, at home, with my daughter, etc.—then I’d say my fluency is not all that impressive. I’d be at the level of someone who’s been here six months. Baby talk, if you want to put it that way.

Me at 6 months old, eating dog food. Is this where I want my level of German fluency to be?

But, if we look at the factors of how life has actually been in those fifteen years—i.e. I have a minor in German, which is helpful, but work at an English speaking school, am married to an American, have mostly English speaking friends, go home to Buffalo for large chunks of time, and am not involved in any clubs or otherwise German-intensive experiences—well, then, I’d say my language level is better than one would expect. Some might even say my German is…good.

(I’m not sure my scale scenario is working.)

I think what pushes the fib is that things start out so well.

I can steer my way through most topics, and would even say I’m somewhat of a master when it comes to vocabulary for expressing disdain about Umweltverschmutzung (environmental pollution—there was a unit on it every language class I took in college. I’m thankful for this. It’s a valid, frequent topic of conversation around here.)

So, a German’s initial reaction when speaking to me (probably given that, sadly, many Americans they encounter can’t speak more than a few butchery words of the language) is pleased surprise.

I fan my hand in a downward arc of modesty that says, “Nah.”

They go on with a few more compliments about my language prowess and I’m just starting to bask in the glory when they ask, “Und seit wie lange sind Sie hier in Deutschland?”

Saying FIFTEEN YEARS will kill it! It will turn this whole pleasant exchange into something judgmental and embarrassing and un-cool. That pleased surprise will morph into that look where someone tucks their neck in, giving a triple chin effect, and raises their eyebrows before saying, “WHAAAAAT?”

And then the compliments keep coming.

And I feel good about myself.

And I feel guilty.

Along these same lines, I’m prone to pretending I understand things that are said to me when I actually don’t. This happens with my doctor, or my taxman, or the waiters at restaurants we frequent.

They’ll say things to me, often very important things that I need to understand, and even if I don’t understand I’ll nod and say, “Ja. Das klingt gut” or else mumble something that sounds as generic as possible to pass the comprehension test.

Reason being, these people know how long I’ve been in the country. It’s not acceptable to be unable to understand something they say.

The group of people I feel most self-conscious speaking German to are children. My mouth opens and what comes out is the inner goo of clams. Or else, nothing. Mostly, I just do a lot of nodding and try to get away from them as soon as possible.

First of all, if you mispronounce a word or mess up grammar, children don’t have the cognitive ability to reconstruct what you said and keep the conversation going. They can’t do the dirty work for you. They don’t supply words. They don’t let you off the hook if your response doesn’t match the question. They don’t slow down their speech. They don’t choose elementary words (smart-ass kids these days.) They don’t have proper grammar mastered, yet, which makes things even harder for the non-native speaker.

Instead, they just give you the fully honest facial expressions of the very young. Frowns, raised eyebrows, looks that say, “Um…what? Are you some weirdo or something?” 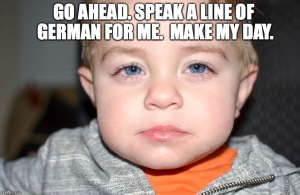 And so, when I talk to them it’s generally all one giant white lie. Lots of nodding and pretending we’re engaged in a mutually coherent conversation.

In my mind, kids are the ultimate judge of just what level your language skills are at. And, if you can’t even converse with a five year old…? So therein lies the whiteness of my lies.

So, let me just take a thirty-second turn at psychoanalyzing this. Why do I tell white lies in general? And when do lies move from the symbolically innocent shade of white, to a more gruesome shade—like neon green? And why don’t I do something to improve my German if I obviously don’t want to admit that the level I’m at doesn’t reflect fifteen years of living here?

(Because in my heart I know that it should reflect that time. I think it’s easy as an expat to make lots of excuses—oh, I work in English and am married in English and have babies in English. But, there’s always a way to immerse and improve. If you really want to make the effort.)

So, are white lies acceptable in these cases? Am I an evil person? Or should we force ourselves to be honest and embarrassed?

And as for what’s going on with my German. Well, when I first moved here I was completely motivated to learn. I threw myself into learning the language like some people throw themselves into polygamous relationships.

But then I actually taught German for a number of years and felt like a complete hack doing so. It’s almost like someone who loves to play Frisbee in their free time. They play it day in, day out. They live for the flick of a wrist. But then they become a professional Frisbee player and no longer enjoy it? Does that make sense? And especially if they were never even a very good Frisbee player to begin with, but got picked for this national team they had no business being on? And were just waiting to be found out?

Yeah, that would take some of the fun out of Frisbee, I’d say.

There’s a whole story about my time as a German teacher hack that I’d love to share. But, it deserves a post of its own.

How about you? Do you tell white lies? About what? Are we inherently evil?

23 thoughts on “My Lies Are White Or Neon Green”