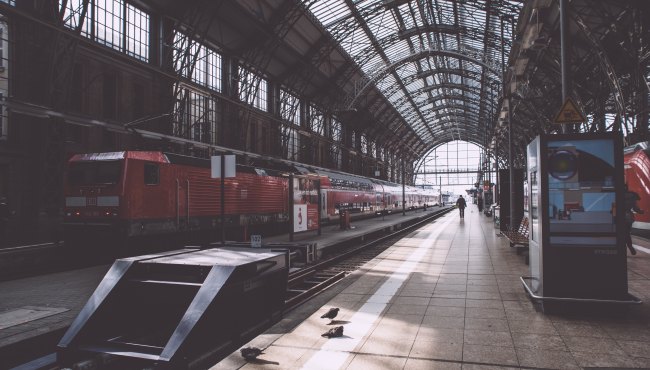 How does one start blogging again after a six-month absence? I suppose the best way is to jump back in and start posting—and also to apologize.

The last time I wrote, we were headed to Washington State for winter break and I had every intention of posting regularly the whole time we were home. But, the vacation was kicked off by Laken’s first of what became a winter of illnesses. On the airplane she spiked a 105 fever and was so out of it we ended up having a flight attendant summon doctors over the intercom. Laken was driven by ambulance to a Wenatchee hospital the following afternoon and diagnosed with RSV (a virus I’d never even heard of until she got it.)

From there we had a few weeks of health until it was a severe bout with Rotavirus (and she spent two nights in the hospital for that, too, because she lost about 10% of her body weight. The diarrhea was that bad.) Then we were on to stomach flus and colds and pneumonia and the sniffles (which she didn’t mind all that much because she’s developed a fondness for eating her boogers.)

Here we are in Washington State with RSV 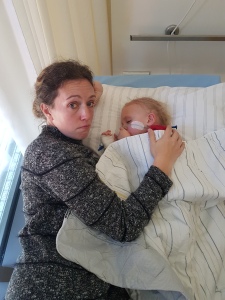 And here we are in Germany with Rotavirus

Laken’s Game of Thrones worthy winter of illnesses aside, I just got lazy. And preoccupied with raising a toddler. I wrote blog posts in my head, but they never materialized.

But, it’s time now. My goal is to write at least once a week. I miss blogging—I miss writing and reflecting on life here in Germany. And, I miss reading other people’s blogs. Do you ever have that sudden awareness, when you pass through a crowd of strangers in some public space, that you’re most likely never going to see a single one of them again? That you’ve glimpsed their face incidentally, but you’ll never know their strengths, their intense fears, the way they take in and interpret the universe through their senses?

Well, blogging seems to me like a way to get to know some of these random individuals. To hear their story. To get their take on the quirks of life in whatever part of the world they inhabit. To hear what lessons their day dealt out.

I have lots to write about these days. For one, we just moved away from our beloved Heidelberg and will be living in Wiesbaden, Germany from now on. 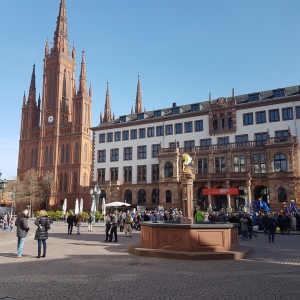 Not a bad looking church.

How do I feel about this? I asked my husband Todd this question earlier. “Where are you right now with Wiesbaden?” I asked.

Todd ‘s fine. He said that he’s home wherever his family, TV, and beer mugs are.

I’m taking longer to get there. Right now it feels like we’re on vacation and exploring new stores and restaurants (and, BTW, it’s a freaking back breaking vacation, because we have a LOT of stuff and have been working our hineys off.)

I wonder when, or even if, Wiesbaden will go from being a place that feels like vacation…to being home? Is it just time that helps the transition along? My bet is that memories are the foundation.  Relationships are the bricks.

As we walk through Wiesbaden I admire the fact that it’s a very pretty city. There’s no doubt about it. It’s easy to see that there’s a lot of wealth here. The buildings are opulent, have a “frosted wedding cake ceiling” feel to them (to rip off a line of Fitzgerald’s from The Great Gatsby.) There are lots of designer stores on the main drag (Wilhelmstrasse) and good restaurants—we’ve already become regulars at one that makes their own tortillas and is well stocked with craft beer.

We got lucky enough to find a massive apartment right in the middle of the city. Inside it’s very quiet and the rooms have high ceilings and a balcony space covered in unfortunate pigeon droppings.

One highlight for me, so far, was to discover the Kurpark. It’s set behind the Kurhaus and Casino and trails around a man-made lake and goes on for quite a while through a wooded area and crisscrossing trails that pass by opulent mansions that sort of make you want to cry from jealousy.  (Or to stand in front of them for a while in hopes that the owners will see you, find you interesting, invite you in, and spoil you.  Kind of like parties? I still pass by parties, or picnics, or people on boats and have this weird, off base hope that I’ll be invited over.)

A place we’ll be running once we rejoin the fitness world.

But Heidelberg is still home. It’s where I discovered the expatriate life, where I found a love for teaching at international schools. It’s the city I met my husband in, the city that created our test tube child.

I’m getting wordy already. I know that blogs are supposed to be succinct and I’m trying to work on that–but as I’m drafting this I’m realizing there’s so much I’ve needed to reflect on. Why do I do this with writing? Start and stop?

Anyway, let’s wrap this up.

Here are my first impressions of this new Wiesbaden life.

Okay, I’m going to stop with this but more is to come! I’m sorry for the leave of absence. And, I’m sorry for blaming my child’s immune system when it really just comes down to a lack of motivation on my part.

My blogging goals are to keep on from here, to be open and honest, and to reflect on this major life change.  I have some personal goals that I’ve set, as well, and this blog will help me to work through them.  In no particular order they are;

2.) Immerse more in German culture.  Do whatever it takes–join clubs, speak German as often as possible.

4.) I am notoriously antisocial at the schools I teach at.  I chat all day with the kids, but avoid staff rooms and raising my hand at meetings.  I want to change that.

3 thoughts on “So, about that six month break I took from blogging…”