Last week I fell off the blogging wagon.  I’m not sure why–all I can say is that every time Laken went down for a nap and it was my usual writing time I either suffered from writer’s block or found something incredibly important to do.

But this week I’m ready to be back on track, and I have pictures to share as part of my definitely-not-regular feature called ‘The Weekly Spazieren.’ I think by weekly I meant ‘taken throughout any given week of walking’ and not ‘I promise to post this every single week, as in I’m making a definite commitment to you right here, right now.’

I’m not normally a commitment-phobe, but am becoming one as of late.

In fact, on Monday we’re leaving for the States and I’m already wondering if I’ll be able to keep up the blogging habit while we’re gone. Todd and I tend to be pretty decadent while we’re on vacation. We’re prone to eating at restaurants three times a day (I mean, it’s the States–can you blame us?) and filling in the gaps with beer breaks in the backyard.  I might be too stuffed/drunk to feel creative.  But, I’m going to try my very hardest to continue writing on a weekly basis.  After all, I love doing it.  And, at least in my world, all it takes is one little break and it becomes a lifestyle.  Story of my last six years.

So, let’s go spazieren, shall  we?

(Just as a recap, in The Weekly Spazieren I share pictures of all things quirky, beautiful, or thought-provoking that I notice on my strolls with Laken.  There’s nothing like pairing mindfulness with a German suburb to find great photo ops.)

Todd and I took the baby out early last week and we weren’t even fully around the block yet when we spotted a couple of people staring at us from a neighbor’s window. 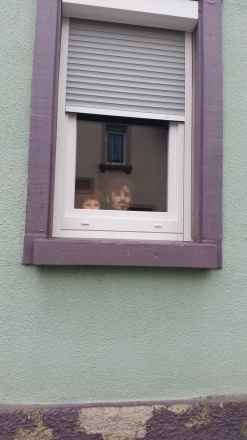 For a split second I thought they were real people, keeping guard.  But if you zoom in… 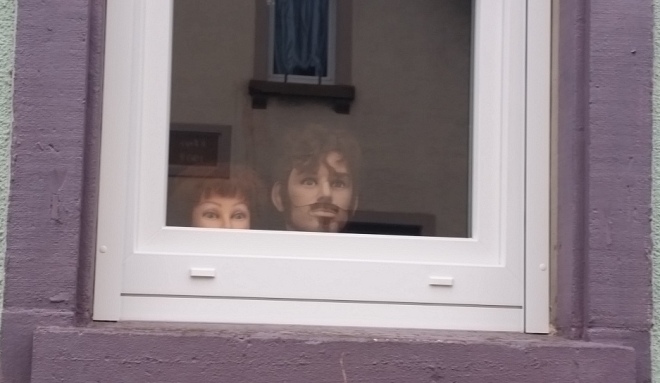 Nope.  They’re mannequins.  And, I do appreciate the “real” mustache and hair on the male.  Quite often female mannequins get all the glory of lifelike hair and men are left with Ken-head (i.e a plastic cap of brown waves on the skull.)

One thing I love about some of the quirkier things we spot on our walks are the questions you just can’t help but ask.  What’s going on here? Did our neighbors mean this as a practical joke? Something to make you smile as you walk by? Are they trying to beat back the stereotype that Germans aren’t funny? What’s the story there? Are these mannequins designed to look like the owners of the house? Is this a hairstylist’s home?

Anyway, I saw this plastic couple in the window and felt borderline creeped out, but also inspired to write a story about it.  Some day.  When I have time.

A bit later in our walk Todd (who often notices things before I do) pointed out something on a neighbor’s roof.

It looked like the very tiny profile of a person, so I zoomed in with my camera (and by camera I mean the not so fancy one on my Galaxy 5 cell phone.  I’ve dropped and broken the last three camera’s I’ve owned so I’m swearing off of them for a while.)

One of Snow White’s seven dwarfs made its way up to the top of the roof! Now, again–a story is here.  What prompts someone to purchase a statue of one of the dwarfs (can we make out which one he is?) and place him at the very top of the roof?

Is it a social/political statement of some kind? Is it another example of a German being, dare I say it, funny? What does this say about the people who live here?

It definitely made me curious, just like I’m sure people visiting my family’s house back in the day were curious about the dead frogs holding instruments in our china cabinet.

The story to that is my father bought them in Tijuana, Mexico on a family vacation.  (Probably shortly after he agreeably took a swig of tequila from a complete stranger’s bottle.) The frogs were dead but preserved through some type of plasticization (think Body Worlds if you’ve seen the exhibit.) Their stiff limbs were wrapped around miniature electric guitars and banjos, and if you don’t think the Blackwood family needed to come back from the west coast with this one-of-a-kind souvenir, you’re crazy.

However, I don’t believe the china cabinet was exactly where my mom preferred them to be.  Waterford crystal and dead frogs are certainly an eclectic pairing, but possibly not the look she was going for.

And yet there they made repeated appearances.

Anyway, on this very same walk, Todd and I turned yet another corner and saw this.

Okay. I mean, I’m not a pervert or anything–but you try to tell me that’s not a penis. Here, let me zoom in for you.

I understand that people sometimes miss spots when trimming down the bushes.  But…? That’s a pretty pronounced shape.

I hope this post is proving what I’ve known all along.  Germans not only have a sense of humor–they are hilariously inappropriate, even when it comes to foliage.

On a completely different note, check out this person’s house (hope they don’t mind it’s on the internet.)

Something I love about European homes is the artistry.  Houses can be more than just functional.  How about pastel colors? Paintings? Even some text here and there?

How about a dwarf leaping from the roof?

Speaking of art, my next picture actually comes from downtown Heidelberg.

Walking down the city’s main street, you see any number of street artists. One of my favorites (who hasn’t been there in a while) is this guy who recreates masterpieces of art in chalk.  He’ll be down on the his knees all day long, drawing the Sistine Chapel ceiling or Mona Lisa or any number of things by Monet (chalk’s a good medium for him) and the likeness is just incredible.  You just watch this guy work and can’t help but feel anxiety on his behalf because…rain.  It does do that here and there in Germany.  Every day or so.  And if not rain, then feet, spit, spills, vomit.

The chalk man definitely gets a Euro or two from me.

Aside from him, as you walk down the Heidelberg Hauptstrasse you might see flutists, German guys in their twenties playing guitar and singing American songs in very thick accents (and often incorrect lyrics,) and people doing things like this:

I cannot tell you how many times I’ve had this phenomenon explained to me, and I still just don’t get it.  Apparently there’s a thingy in the sitting guy’s arm that goes up the back of the other one, holding him up? He’s sitting on something?

But they’ll stay like that for a very long time.

What do you think–would these guys earn a Euro or two from you?

I’m going to wrap up this week’s Spazieren with a couple more pics from the doll shop near our house.  There’s no display on earth that creeps me out more than this one.  Notice the clown.  And the screaming baby head.

Hope your week is off to a great start, and I’ll be posting again later this week because I’m sure I’ll have all kinds of laundry and packing to do and I’ll be looking for any way to get out of it that I can. 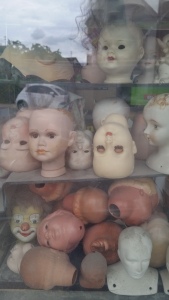 19 thoughts on “The Weekly Spazieren: Mannequins, Suggestive Foliage, and Snow White’s Dwarf on a Roof”